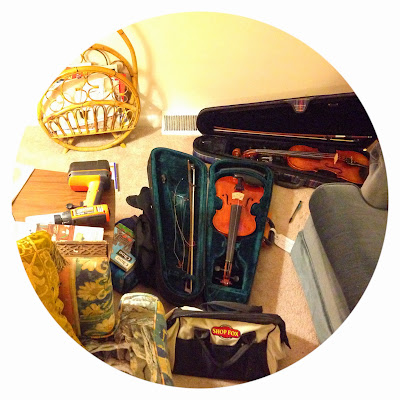 A friend's daughter's violin strings kept breaking, and I was surprised her orchestra teacher didn't catch on to what was happening. This is another common violin repair/issue that happens ALL the time, especially with newer violins.

This happens especially quickly in fractional violins because the pegbox and pegs are so small. So be super careful not to press in pegs with more force than necessary on the little ones. Take it easy on the kids. There's a parenting metaphor for you.

Anyway, so if that peghole creeps too far in, it will go into the peghole, and that will clip off the string like a pair of scissors.

It takes one look to see where the pegholes lie. If a string breaks near the winding/top of the string, definitely look for that.

If they're coming close or are already drifting into the pegbox wall, drill a new hole. Use the smallest bit that will allow the string to fit. I can't remember what size I usually use--it is the same bit for the E, A, D, and G holes, even though the E is thinner than the rest. (Good luck trying to find a bit as small as an E string--not necessary.) If the holes are too big the ends of the strings just don't stay in as well and may slip out.
Posted by Liz Lambson at 6:20 PM