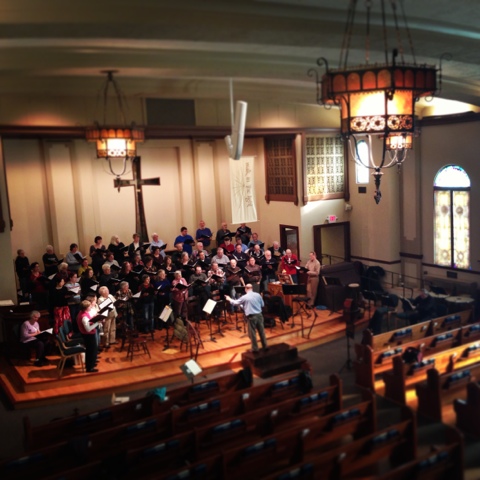 Today is the great American holiday, Superbowl Sunday. A time when friends and family come together to witness the greatest battle of the year with potato skins and hot wings and nachos and drinks. Million-dollar commercials. Million-dollar stars on the field. A time when those who could care less about football might find themselves on a pew in the Hollywood district anticipating music composed by dead men who wore wigs.

I sent the boys to a sitter's house after church. My husband is out of town and I'm sad he'll miss my concert today. He has been to almost every concert I've played since we got married. Most of the time he falls asleep at least once during the performance because it's far more relaxing than any of his day-to-day activities. But it warms my heart when he stands to applaud at the end of each performance. I love to see him smiling up at me.

He told me it's special to him, to see me play. It reminds him of who I am and who I was when he met me, that girl who played the bass in the jazz ensemble concert he attended after asking Willie how he could be a part of my world. And then he came with his brother to watch me play that avant-garde 20th-century trio. Afterwards we watched Strictly Ballroom and held hands for the first time.

I miss those days back then, in Utah, when music was my life. When my loved ones and friends came to see me play. Like Farook, he has such a deep appreciation for music--he would go out of his way to try and make it to every concert possible. And before then, in high school, my dad never missed a band or orchestra concert. I always had someone there cheering me on. Sometimes there were even flowers.

After orchestra concerts at BYU I would walk upstairs after chaining my bass up in the basement locker room, up to the sea of people in the HFAC lobby. I always, always made my rounds to see if anyone I knew had come, and when I found those friends and acquaintances and even professors who were there in the audience we would embrace and smile until our cheeks hurt and talk about how beautiful the music and the experience was.

There were only a few times when I milled around the lobby not to find any familiar faces, and in those cases, I was extremely put out. So today as I came to perform I looked out at the audience and realized that everyone was a stranger to me. Strangers in a strange land. I felt a twinge of that sad feeling, that lonely feeling that no one had come to see me play. And yet, everyone there had come to see me play--just as one part of a whole. I reminded myself that it was a blessing to even be on stage.

Then we played Charpentier's "Te Deum."

I felt my old sense of connection with the players around me, listening for the subtle use or lack of vibrato played in true Baroque style by Mary, the principle violinist. I watched Dale, the cellist in front of me, to match the movement and direction of my bow with his. I tuned into the bass section of the choir, trying to match their intensity with accents to mimic their crisp enunciation of the Latin text.

The piece ended with this triumphant D major chord and I hammered it with my tuned-down low D string. The choir belted it out. And the moment that final cadence exploded to an end, a man in the second row in front of me just shouted with joy, throwing his arms in the air, high to the ceiling in ecstasy. "Yes!" And he proceeded to applaud and grin with the widest of open-mouthed smiles and cheeks flushed pink with excitement. Goal! Score! This moment was greater than any touchdown!

As the concert ended and the audience clapped, I looked out across the room and up into the balcony. I was tempted to let my eyes roam again in search for a familiar face. But I stopped when I saw Dale, the cellist, reaching back to hold my hand. He gave it a warm squeeze accompanied by a genuinely kind look that said, sincerely, "Well done." Having played with Dale just a few times, I feel that he is a kindred spirit. I feel a great sense of joy each time we have the opportunity to perform together, and I sense the same sentiment from him.

The organist, John, reached for my hand too, thanking me and telling me, again, what a pleasure it was to see me, to play with me again. The others too, they had welcomed me back, asking about my children, saying, "We miss you in the Vancouver Symphony." They treated me with respect, as an adult, as an equal, as an artist, as a sophisticate.

And it occurred to me then: this is my community. Here is the connection I was grappling for. In the orchestra itself were the familiar eyes I sought to meet. There, with me on stage were they who both understood and appreciated this offering of talents.

And in the audience were the people who came not for me, but for the music. That is why I came too. Not to show off or glorify myself, but to glorify even God with these sacred texts lifted up in harmony.

I reflected on my choosing to play concerts--gigs for pay, work--on the Sabbath. Today I felt more spiritually uplifted by the purity of these rich liturgical compositions than I did at church. This is where I needed to be, doing what I needed to be doing. Here I could worship in a deeply familiar way, throwing to the heavens the tangible gift of my talents as an instrumentalist.

I sat in the pews after the concert until all the chairs were put away and the altar brought back up to the center of the wooden stage beneath the large cross. Everyone was gone but just a few people cleaning up. The conductor asked if I were waiting for a ride. No, I was hanging on to the peace I felt there.

It was a strange feeling, almost unnerving, to walk back to the car alone with my bass. No children, no husband, just myself. I passed an older woman in a knit beret who smiled at me as she opened her car door and said, so gently, "Thank you for the performance. It was wonderful."

"Thank you for coming," I said.

Thank you for coming to see me play. 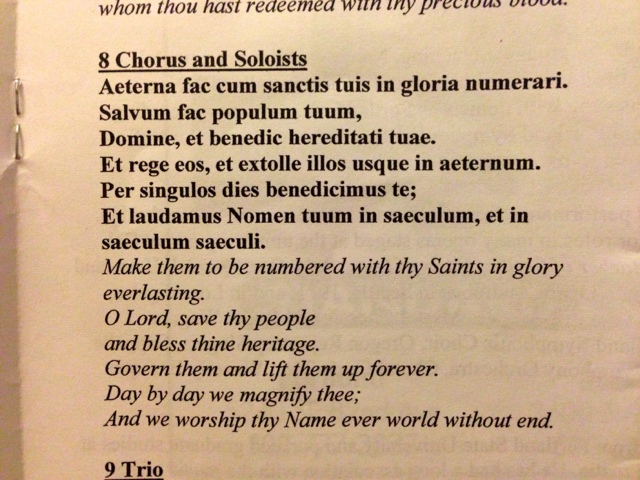